When Recurrent Models Don't Need to be Recurrent

In the last few years, deep learning practitioners have proposed a litany of different sequence models. Although recurrent neural networks were once the tool of choice, now models like the autoregressive Wavenet or the Transformer are replacing RNNs on a diverse set of tasks. In this post, we explore the trade-offs between recurrent and feed-forward models. Feed-forward models can offer improvements in training stability and speed, while recurrent models are strictly more expressive. Intriguingly, this added expressivity does not seem to boost the performance of recurrent models. Several groups have shown feed-forward networks can match the results of the best recurrent models on benchmark sequence tasks. This phenomenon raises an interesting question for theoretical investigation:

When and why can feed-forward networks replace recurrent neural networks without a loss in performance?

We discuss several proposed answers to this question and highlight our recent work that offers an explanation in terms of a fundamental stability property.

A Tale of Two Sequence Models

The many variants of recurrent models all have a similar form. The model maintains a state $h_t$ that summarizes the past sequence of inputs. At each time step $t$, the state is updated according to the equation [ h_{t+1} = \phi(h_t, x_t), ] where $x_t$ is the input at time $t$, $\phi$ is a differentiable map, and $h_0$ is an initial state. In a vanilla recurrent neural network, the model is parameterized by matrices $W$ and $U$, and the state is updated according to [ h_{t+1} = \tanh(Wh_t + Ux_t). ] In practice, the Long Short-Term Memory (LSTM) network is more frequently used. In either case, to make predictions, the state is passed to a function $f$, and the model predicts $y_t = f(h_t)$. Since the state $h_t$ is a function of all of the past inputs $x_0, \dots, x_t$, the prediction $y_t$ depends on the entire history $x_0, \dots, x_t$ as well.

A recurrent model can also be represented graphically. 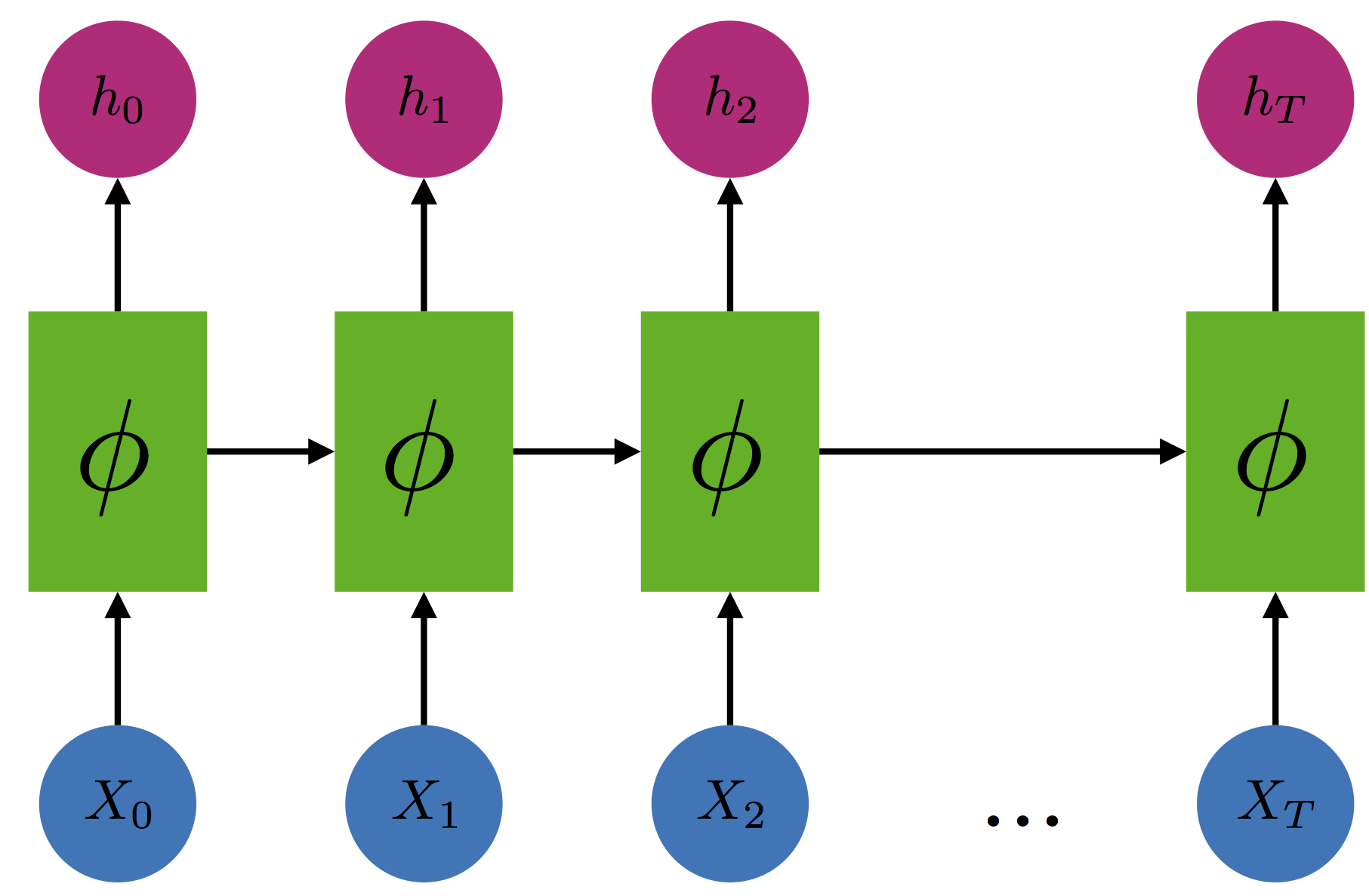 In this setup, the predictions of the recurrent model still depend on the entire history $x_0, \dots, x_T$. However, it’s not clear how this training procedure affects the model’s ability to learn long-term patterns, particularly those that require more than $k$ steps.

Instead of making predictions from a state that depends on the entire history, an autoregressive model directly predicts $y_t$ using only the $k$ most recent inputs, $x_{t-k+1}, \dots, x_{t}$. This corresponds to a strong conditional independence assumption. In particular, a feed-forward model assumes the target only depends on the $k$ most recent inputs. Google’s WaveNet nicely illustrates this general principle.

In contrast to an RNN, the limited context of a feed-forward model means that it cannot capture patterns that extend more than $k$ steps. However, using techniques like dilated-convolutions, one can make $k$ quite large.

Why Care About Feed-Forward Models?

Although it appears trainability and parallelization for feed-forward models comes at the price of reduced accuracy, there have been several recent examples showing that feed-forward networks can actually achieve the same accuracies as their recurrent counterparts on benchmark tasks.

How Can Feed-Forward Models Outperform Recurrent Ones?

In the examples above, feed-forward networks achieve results on par with or better than recurrent networks. This is perplexing since recurrent models seem to be more powerful a priori. One explanation for this phenomenon is given by Dauphin et al.:

The unlimited context offered by recurrent models is not strictly necessary for language modeling.

In other words, it’s possible you don’t need a large amount of context to do well on the prediction task on average. Recent theoretical work offers some evidence in favor of this view.

Another explanation is given by Bai et al.:

The “infinite memory” advantage of RNNs is largely absent in practice.

As Bai et al. report, even in experiments explicitly requiring long-term context, RNN variants were unable to learn long sequences. On the Billion Word Benchmark, an intriguing Google Technical Report suggests an LSTM $n$-gram model with $n=13$ words of memory is as good as an LSTM with arbitrary context.

This evidence leads us to conjecture: Recurrent models trained in practice are effectively feed-forward. This could happen either because truncated backpropagation time cannot learn patterns significantly longer than $k$ steps, or, more provocatively, because models trainable by gradient descent cannot have long-term memory.

Despite some initial attempts, there is still much to do to understand why feed-forward models are competitive with recurrent ones and shed light onto the trade-offs between sequence models. How much memory is really needed to perform well on common sequence benchmarks? What are the expressivity trade-offs between truncated RNNs (which can be considered feed-forward) and the convolutional models that are in popular use? Why can feed-forward networks perform as well as unstable RNNs in practice?

Answering these questions is a step towards building a theory that can both explain the strengths and limitations of our current methods and give guidance about how to choose between different classes of models in concrete settings.