The ability of large neural networks to generalize is commonly believed to stem from an implicit regularization — a tendency of gradient-based optimization towards predictors of low complexity. A lot of effort has gone into theoretically formalizing this intuition. Tackling modern neural networks head-on can be quite difficult, so existing analyses often focus on simplified models as stepping stones. Among these, matrix and tensor factorizations have attracted significant attention due to their correspondence to linear neural networks and certain shallow non-linear convolutional networks, respectively. Specifically, they were shown to exhibit an implicit tendency towards low matrix and tensor ranks, respectively.

To put our work into context, let us briefly go over existing dynamical characterizations of implicit regularization in matrix and tensor factorizations. In both cases they suggest an incremental learning process that leads to low rank solutions (for respective notions of rank). We will then see how these characterizations transfer to the considerably richer hierarchical tensor factorization.

Matrix factorization is arguably the most extensively studied model in the context of implicit regularization. Indeed, it was already discussed in four previous posts (1, 2, 3, 4), but for completeness we will present it once more. Consider the task of minimizing a loss $\mathcal{L}_M : \mathbb{R}^{D, D’} \to \mathbb{R}$ over matrices, e.g. $\mathcal{L}_M$ can be a matrix completion loss — mean squared error over observed entries from some ground truth matrix. Matrix factorization refers to parameterizing the solution $W_M \in \mathbb{R}^{D, D’}$ as a product of $L$ matrices, and minimizing the resulting objective using gradient descent (GD):

Essentially, matrix factorization amounts to applying a linear neural network (fully connected neural network with no non-linearity) for minimizing $\mathcal{L}_M$. We can explicitly constrain the matrix rank of $W_M$ by limiting the shared dimensions of the weight matrices $\{ W^{(l)} \}_l$. However, from an implicit regularization standpoint, the most interesting case is where rank is unconstrained. In this case there is no explicit regularization, and the kind of solution we get is determined implicitly by the parameterization and the optimization algorithm.

As can be seen from the theorem above, singular values evolve at a rate proportional to their size exponentiated by $2 - 2 / L$. This means that they are subject to a momentum-like effect, by which they move slower when small and faster when large. When initializing near the origin (as commonly done in practice), we therefore expect singular values to progress slowly at first, and then, upon reaching a certain threshold, to quickly rise until convergence. These dynamics create an incremental learning process that promotes solutions with few large singular values and many small ones, i.e. low matrix rank solutions. In their paper, Arora et al. 2019 support this qualitative explanation through theoretical illustrations and empirical evaluations. For example, the following plot reproduces one of their experiments: 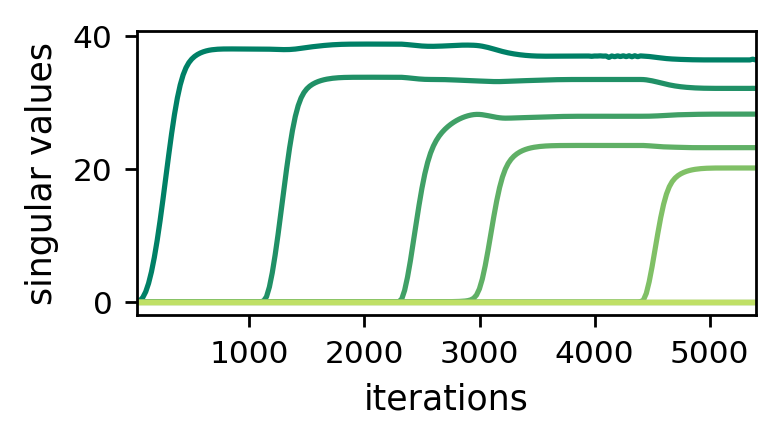 Despite the significant interest in matrix factorization, as a theoretical surrogate for deep learning its practical relevance is rather limited. It corresponds to linear neural networks, and thus misses non-linearity — a crucial aspect of modern neural networks. As was mentioned in a previous post, by moving from matrix (two-dimensional array) to tensor (multi-dimensional array) factorizations it is possible to address this limitation.

A classical scheme for factorizing tensors, named CANDECOMP/PARAFAC (CP), parameterizes a tensor as a sum of outer products (for more details on this scheme, see this excellent survey). Given a loss $\mathcal{L}_T : \mathbb{R}^{D_1, \ldots, D_N} \to \mathbb{R}$ over $N$-dimensional tensors, e.g. $\mathcal{L}_T$ can be a tensor completion loss, we simply refer by tensor factorization to parameterizing the solution $\mathcal{W}_T \in \mathbb{R}^{D_1, \ldots, D_N}$ as a CP factorization, and minimizing the resulting objective via GD:

Each term $\mathbf{w}_r^{(1)} \otimes \cdots \otimes \mathbf{w}_r^{(N)}$ in the sum is called a component, and $\otimes$ stands for outer product. The concept of rank naturally extends from matrices to tensors. For a given tensor $\mathcal{W}$, its tensor rank is defined to be the minimal number of components (i.e. of outer product summands) $R$ required for CP parameterization to express it. Note that we can explicitly constrain the tensor rank of $\mathcal{W}_T$ by limiting the number of components $R$. But, since our interest lies in implicit regularization, we consider the case where $R$ is large enough for any tensor to be expressed.

Motivated by the incremental learning dynamics in matrix factorization, in a previous paper (see accompanying blog post) we analyzed the behavior of component norms during optimization of tensor factorization:

The dynamics of component norms in tensor factorization are structurally identical to those of singular values in matrix factorization. Accordingly, we get a momentum-like effect that attenuates the movement of small component norms and accelerates that of large ones. This suggests that, in analogy with matrix factorization, when initializing near zero components tend to be learned incrementally, resulting in a bias towards low tensor rank. The following plot empirically demonstrates this phenomenon: 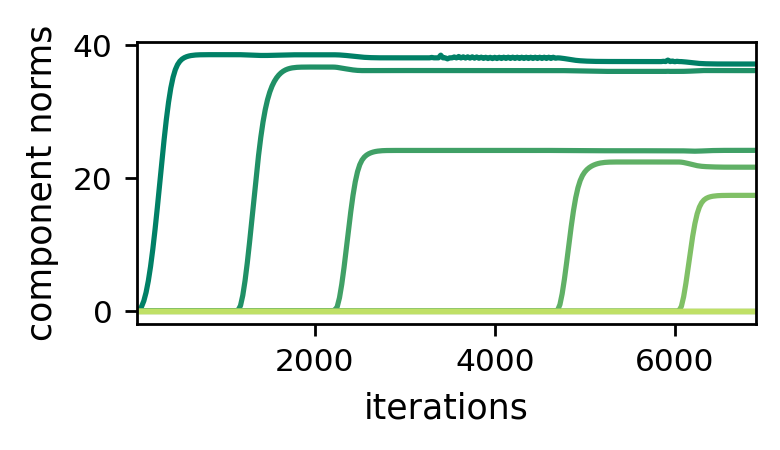 Tensor factorization took us beyond linear predictors, yet it still lacks a critical feature of modern neural networks — depth (recall that it corresponds to shallow non-linear convolutional networks). A natural extension that accounts for both non-linearity and depth is hierarchical tensor factorization — our protagonist — which corresponds to certain deep non-linear convolutional networks (with multiplicative non-linearity). This equivalence is actually not new, and has facilitated numerous analyses of expressive power in deep learning (see this survey for a high-level overview).

At the heart of our analysis is the following dynamical characterization for local component norms during optimization of hierarchical tensor factorization: 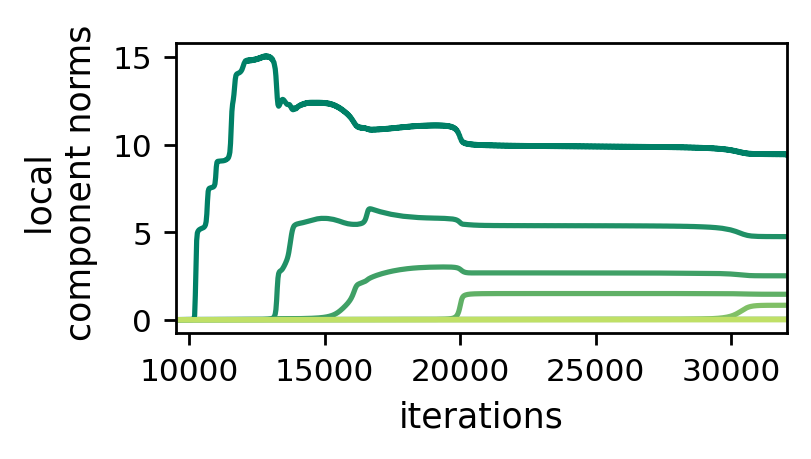 Hierarchical tensor rank is known (Cohen & Shashua 2017) to measure the strength of long-range dependencies modeled by a network. In the context of image classification, e.g., it quantifies how well we take into account dependencies between distant patches of pixels.

The implicit regularization towards low hierarchical tensor rank in hierarchical tensor factorization therefore translates to an implicit regularization towards locality in the corresponding convolutional networks. At first this may not seem surprising, since convolutional networks typically struggle or completely fail to learn tasks entailing long-range dependencies. However, conventional wisdom attributes this failure to expressive properties (i.e. to an inability of convolutional networks to realize functions modeling long-range dependencies), suggesting that addressing the problem requires modifying the architecture. Our analysis, on the other hand, reveals that implicit regularization also plays a role: it is not just a matter of expressive power, the optimization algorithm is implicitly pushing towards local solutions. Inspired by this observation, we asked:

Question: Is it possible to improve the performance of modern convolutional networks on long-range tasks via explicit regularization (without modifying their architecture)?

To explore this prospect, we designed explicit regularization that counteracts locality by promoting high hierarchical tensor rank (i.e. long-range dependencies). Then, through a series of controlled experiments, we confirmed that it can greatly improve the performance of modern convolutional networks (e.g. ResNets) on long-range tasks.

For example, the following plot displays test accuracies achieved by a ResNet on an image classification benchmark, in which it is possible to control the spatial range of dependencies required to model. When increasing the range of dependencies, the test accuracy obtained by an unregularized network substantially deteriorates, reaching performance no better than random guessing. As evident from the plot, our regularization closes the gap between short- and long-range tasks, significantly boosting generalization on the latter.

Looking forward, there are two main takeaways from our work: